Today is the centenary of the birth of Harold Wilson, winner of four General Elections  and Prime Minister for eight years in the 1960s and 1970s.

So why would we celebrate Harold Wilson on a housing blog?

The answer is simple: as PM in the 1960s he achieved the best housebuilding figures in the last century. The chart below doesn’t lie. And as the second chart below shows, he achieved that rare double: hitting a peak in both public and private housebuilding at the same time. The outcome – over 400,000 new homes in one year – is enough to make the modern housing enthusiast’s eyes water. 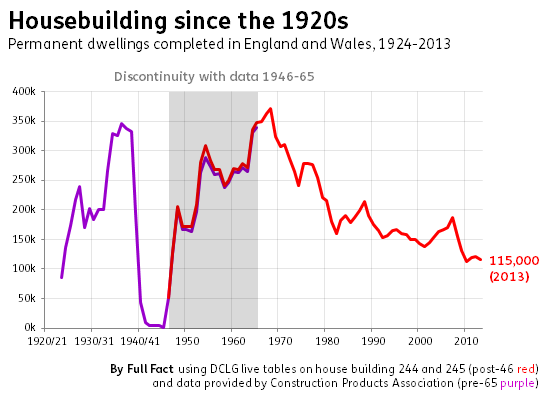 Housing was a big deal in Wilson’s 1964 and 1966 administrations.  The 1964 Manifesto was replete with housing proposals. Development land would be publicly owned and profits retained by the community. Interest rates for housing borrowers would be subsidised and councils would be able to make 100% mortgages available. The Rent Acts would be repealed, old houses would be modernised, and if landlords failed to do so they would be purchased by the council. The 1966 Manifesto set the target of 500,000 houses a year – sadly ‘only’ 400,000 was attained.

It was not just about housebuilding: the Government was committed to encouraging home ownership, and introduced the Option Mortgage Scheme to enable low income households to benefit from the tax relief policy that benefitted other home owners. There was a new departure in terms of area improvement of older housing: the introduction of General Improvement Areas. One policy that I would see as an error in the subsequent highly inflationary era is that an attempt was made to stimulate the housebuilding industry by exempting house owners from capital gains tax.

We had promised to repeal the Tory Rent Act, to provide new machinery for fixing fair rents, and to give Government and all others who required them, the powers they needed to fight the evils of Rachmanism. That Bill is through the Commons despite Tory obstruc­tion. It is in the Lords – within a week of Parliament meeting again, we intend it to become law.

It was on the Bill to restore security of tenure, and it was on the Rent Bill that our new Members, not I imagine to their surprise, saw the full virulence of Tory Opposition tactics when the Tories were fighting for something near and dear to them, the rights of landlords and property interests.

By 1974, when two elections were won in a year, the economic prospects were much reduced. The February Manifesto however repeated the radical approach to housing:  promising to repeal the Tory Housing Finance Act (which had led to rent strikes), to control rents and introduce protection from eviction for furnished private tenants, to start the ‘municipalisation’ of private renting, and to significantly increase subsidies to all housebuilding.

At the time I was working with tenants in Paddington, and I recall the short minority administration in 1974 for being remarkably radical: it felt that the Government was really taking the issue seriously. For example in that one year it increased subsidy for council housebuilding by £350million – curiously the same cash figure suggested this week – more than forty years later – by the Kerslake Commission on housing in London (how small our ambitions are these days!). It also introduced a rent freeze and created Housing Action Areas – thereby keeping me busy for the following few years!

The Manifesto for the October 1974 election contained the commitment to give security of tenure to council tenants – a huge advance but not actually enacted until after Labour went out of office in 1979 when the Tories found that a stronger definition of a council tenancy was a helpful platform for the introduction of the right to buy. It also repeated the promise to introduce land reform, essentially the ‘nationalisation’ of development land, and this time it was enacted, in 1976 along with the Development Land Tax legislation,  but critically, by the time it was on the statute books it was much watered down and we had entered the more austere late 70s economic climate, and it was never really implemented.

Wilson’s resignation in 1975 came before the 1976 ‘IMF crisis’ which put many progressive policies, including housing, into reverse. I see 1976 and not the usual 1979 as the watershed year in the UK when sound progress on most fronts was no longer to be achieved.

Of course Wilson should not get all of the credit for the good things or all the brickbats for the bad – there were a succession of Ministers who did the detail. But he set a tone for Government, he oversaw radical commitments in manifestoes and he worked diligently to deliver them. Both the commitments and the delivery put our current politics to shame.

Wilson died in 1995 suffering from both cancer and Alzheimer’s disease. He was the iconic figure for me growing up and developing an interest in Labour politics and housing – indeed I joined the Labour Party in response to his defeat by Heath in 1970, which was a devastating blow.

This entry was posted in Uncategorized. Bookmark the permalink.